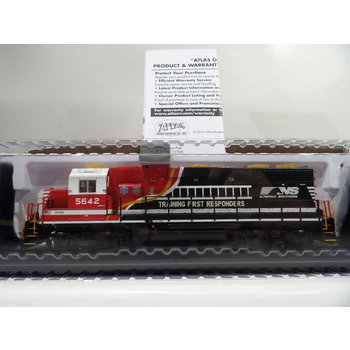 In 1966 EMD introduced a new line of locomotives based on the 16-cylinder 645-series prime mover. The “40-series” included a six-axle and four-axle model, the latter being the GP40. A total of 1,145 units were produced between 1966 and 1972. These turbocharged 3,000hp locomotives were used primarily in road freight service. The GP40 was a versatile locomotive that could be found across the US hauling drag freights over mountain passes and leading high-speed intermodal trains across flat terrain. Three rooftop radiator fans at the rear of the long hood differentiate a GP40 from its lower horsepower counterpart, the GP38, which has two fans at this location.

Concurrent with GP40 production, EMD offered a lower horsepower, non-turbocharged locomotive based on the same 645-series prime mover. The four-axle GP38 was rated at 2,000 hp and had the advantage of costing less than the GP40. A total of 727 units were produced between 1966 and 1971 when the model was superseded. The wheelbase of the GP38 was identical to that of the GP40. Both units shared the same EMD road-switcher style body that was introduced with the GP35 in 1963. A desire for standardization caused the GP38 to share the same wheelbase, frame and many external components as the GP40. The GP38 was purchased by large and small roads alike. It was routinely found in local and road freight service throughout the US. Many GP38s and 40s are still in service today.

Options on the Atlas GP38 and GP40 models include a long hood with or without dynamic brakes and an underframe with 2,600 or 3,600 gallon fuel tanks.