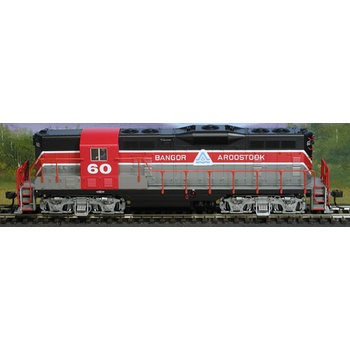 Model Information: The Atlas GP7, GP9 and GP9-TT models are some of their oldest models. The models share the same internal mechanisms and differ only in their shell details. Unlike many of their other older body styles, these bodies have been updated several times and are still a regular part of the Atlas production cycle.

The first release of this body type was in 1974 and the models were produced by Roco in Austria. Production for these models ended in 1982. The next release started in 1987 and the models were re-tooled by Kato in Japan for Atlas. The third version came out in 1995 and was made in China for Atlas and these engines were essentially a redo of the Kato mechanism. Finally, in 2006, a completely new mechanism was introduced and this 4th version is a split frame, dual-flywheel, slow-motor, modern engine. Furthermore, with the more recent releases, most road-names and numbers are available in both a DCC-Ready and a Decoder-Equipped version.

The EMD GP7 is a four-axle (B-B) road switcher diesel-electric locomotive built by General Motors Electro-Motive Division and General Motors Diesel between October 1949 and May 1954. Power was provided by an EMD 567B 16-cylinder engine which generated 1,500 horsepower (1,119 kW). The GP7 was offered both with and without control cabs, and those built without control cabs were called a GP7B. Five GP7B's were built between March and April 1953. The GP7 was the first EMD road locomotive to use a hood unit design instead of a car-body design. This proved to be more efficient than the car body design as the hood unit cost less to build, was cheaper and easier to maintain, and had much better front and rear visibility for switching.

Of the 2,734 GP7's built, 2,620 were for American railroads (including 5 GP7B units built for the Atchison, Topeka and Santa Fe Railway), 112 were built for Canadian railroads, and 2 were built for Mexican railroads. This was the first model in EMD's GP (General Purpose) series of locomotives. Concurrently, EMD offered a six-axle (C-C) SD (Special Duty) locomotive, the SD7.