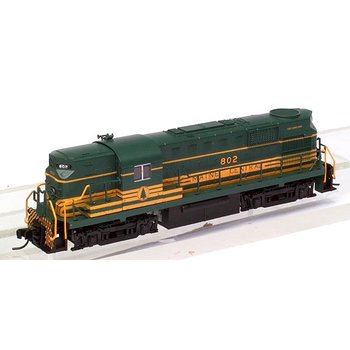 Model Information: Atlas introduced this model in 1986. It was originally produced by Kato for Atlas under contract. The Kato version shares a chassis with Kato's RS-3 model but some of the internal components differ, primarily in the worm assembly. Atlas ceased importing this model in the 1990s and later, in 2006, designed their own version which was produced in China. This new version (2006+) is properly DCC-Ready and accepts a drop-in decoder. It also features a skew-wound motor with all eight wheels involved with electrical pickup and drive (no traction tires). The Chinese version features body-mounted AccuMate couplers whereas the Kato version have truck-mounted couplers. This version also has Golden White LEDs, separated handrails and side sill and a prototypical wheelbase. The Kato wheelbase is off due to the common chassis shared with the RS-3.

The Maine Central Railroad Company (reporting mark MEC) was a former U. S. Class I railroad in central and southern Maine. It was chartered in 1856 and began operations in 1862. By 1884, Maine Central was the longest railroad in New England. Maine Central had expanded to 1,358 miles (2,185 km) when the United States Railroad Administration assumed control in 1917. The main line extended from South Portland, Maine, east to the Canada?United States border with New Brunswick, and a Mountain Division extended west from Portland to Vermont and north into Quebec. The main line was double track from South Portland to Royal Junction, where it split into a "lower road" through Brunswick and Augusta and a "back road" through Lewiston which converged at Waterville into single track to Bangor and points east. Branch lines served the industrial center of Rumford, a resort hotel on Moosehead Lake, and coastal communities from Bath to Eastport.