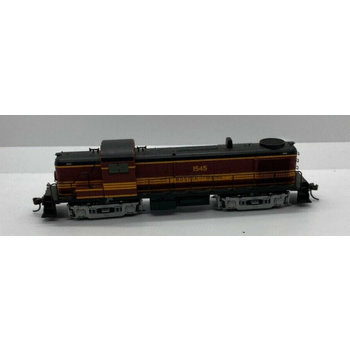 Model Information: Atlas introduced the Kato-produced RS-3 in 1983. They followed up with the RSD-4/5 in 1987 (also Kato-produced). Kato also recyled the chassis for use in their RS-11. Atlas redesigned the RS-3 in 1999 and production moved to China. The models were again modified in 2001 (RS-3) and 2004 (RS-4/5) and from then on featured Atlas "Slow-Speed" motors. The Chinese RS-3 and RSD-4/5 share the same internal mechanism.

The early releases were the first locomotive produced by Kato for Atlas. It was vastly superior to the earlier models produced by Roco for Atlas. The combination of the split-frame design, directional lighting and 5-pole motor with bearing blocks to hold the worm gear in place made it the first "modern" N-Scale design for a North American locomotive. The 2001 Chinese version is very similar to the Kato version.

Introduced in 1950, the all-purpose, 1600-HSP RS-3 diesel locomotive had the stamina and strength for freight and passenger service yet was agile enough for yard work. With its rugged, dependable design, it's no wonder that many of these versatile RS-3 locomotives are still working today on short lines, tourist lines, and hauling freight. The ALCO RS-3 is a 1,600 hp (1.2 MW), B-B road switcher diesel-electric locomotive. It was manufactured by American Locomotive Company (ALCO) and Montreal Locomotive Works (MLW) from May 1950 to August 1956, and 1,418 were produced - 1,265 for American railroads, 98 for Canadian railroads, 48 for Brazilian and 7 for Mexican railroads. It has a single, 12 cylinder, model 244 engine.

Well over 1,300 RS-3 road-switcher locomotives were built by ALCO between 1950 and 1956. It can be considered one of the most successful four-axle diesel road-switchers ever produced by the builder. These 1,600hp locomotives were powered by an ALCO 244 V-12 engine which was complimented by rugged GE electrical components. The RS-3 was truly a versatile locomotive. It could be found in virtually every type of service from passenger and commuter runs to heavy-haul and local freight assignments. Original owners of the RS-3 tended to be in the eastern and central regions of the US (with heavier concentrations in the northeast and southeast).

During this same time-period, ALCO offered a six-axle road-switcher which was more commonly found in the west. The RSD-4/5 was externally very similar to the RS-3, having six-axle trucks as an obvious spotting feature. They produced the same 1,600hp as an RS-3, but offered increased tractive effort due to the use of a larger generator. Many RSD-4/5s were assigned to operate in mountainous territory (with varying degrees of success) on the Southern Pacific, Santa Fe and the Utah Railway.