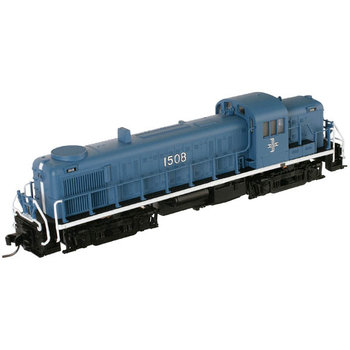 Model Information: Atlas introduced the Kato-produced RS-3 in 1983. They followed up with the RSD-4/5 in 1987 (also Kato-produced). Kato also recyled the chassis for use in their RS-11. Atlas redesigned the RS-3 in 1999 and production moved to China. The models were again modified in 2001 (RS-3) and 2004 (RS-4/5) and from then on featured Atlas "Slow-Speed" motors. The Chinese RS-3 and RSD-4/5 share the same internal mechanism.

The early releases were the first locomotive produced by Kato for Atlas. It was vastly superior to the earlier models produced by Roco for Atlas. The combination of the split-frame design, directional lighting and 5-

The Andover and Wilmington Railroad was incorporated March 15, 1833, to build a branch from the Boston and Lowell Railroad at Wilmington, Massachusetts, north to Andover, Massachusetts. The line opened to Andover on August 8, 1836. The name was changed to the Andover and Haverhill Railroad on April 18, 1837, reflecting plans to build further to Haverhill, Massachusetts (opened later that year), and yet further to Portland, Maine, with the renaming to the Boston and Portland Railroad on April 3, 1839, opening to the New Hampshire state line in 1840.