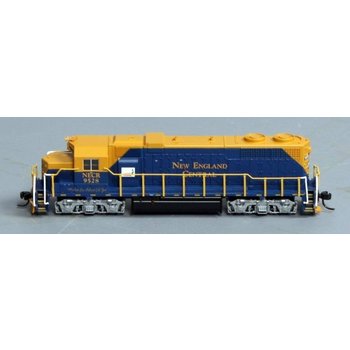 Model Information: The Atlas GP38 is made in China and has always been made in China. These mechanisms run fine but the first releases (1996) do not support drop in decoders. Both versions use a dual-flywheel, split frame chassis with a 5-Pole skew-wound motor.

New England Central was born in 1995 when Canadian National sold the Central Vermont to RailTex. RailTex renamed the line New England Central. In 2000, RailTex was purchased by RailAmerica which has since been combined with the Genesee & Wyoming shortline group.

NECR runs 394 miles of track from East Alburgh, Vermont on the Canadian border just south of Montreal south down the length of Vermont, through Massachusetts, to the port of New London, Connecticut. Along the way, they interchange with CN, Pan Am, Norfolk Southern, Vermont Railway, Canadian Pacific, CSX, Green Mountain, Central Maine & Quebec (recently acquired by CP,) Providence & Worcester and several shortlines.