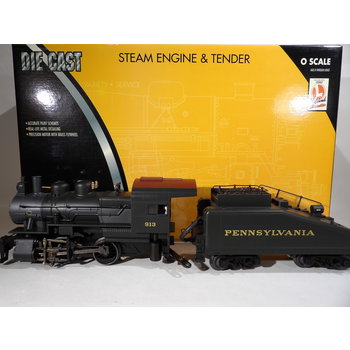 The A5 Switcher was a little workhorse of the Pennsylvania Railroad. They owned 47 of the 0-4-0 locomotives and most were built in 1916 and 1917 at the Juniata Shops. These were the largest 0-4-0s and the last built for a major railroad. Thirty of these engines were assigned to the Philadelphia area where there is a lot of sharply curved street trackage that only a switcher with a small wheel base of the A5's 7 feet 3 inches could negotiate. Traveling down cobblestone streets, the engines mingled with cars and trucks, and sometimes collided with them. The A5s were equipped with a slope back tender for rear visibility, but this reduced the amount of water they could carry to 5700 gallons.

This Steam switcher is in Like New++ condition. It looks to have only been test run. We have tested it to make sure that all features work and that it runs properly. Includes the box, Styrofoam packing insert.