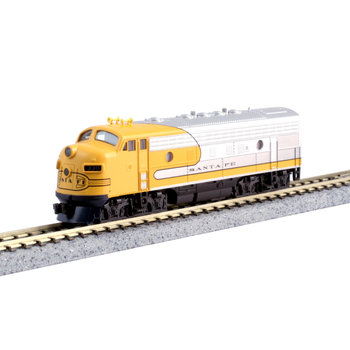 The F-Unit is probably the most recognized diesel locomotive in North American history. It was found on railroads from East to West and North to South. Similar in appearance to its predecessor, the EMD F3, the EMD F7 was a 1500 hp multi-purpose locomotive. Although originally promoted as a freight-hauling unit by EMD, the F7 was also used in passenger service hauling such trains such as the Santa Fe Super Chief and the Great Northern Empire Builder. The F7 was the fourth model in GM-EMD's highly successful F-unit series, and was for a long time (until the introduction of the EMD SD40-2 freight unit) was the best selling Diesel-electric locomotive ever made.
Model Information:

The Kato EMD F7 comes in both A and B (cabless) variations, and is retooled from earlier variations of the F-unit locomotive chassis to make it DCC friendly. Passenger units can be identified by their Steam Generators vs. freight units which lack this detail.
Model Features: