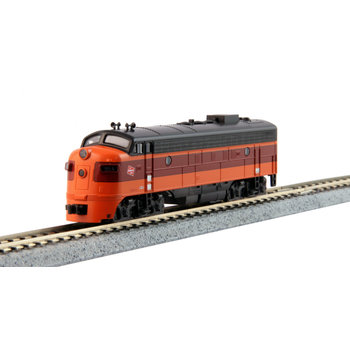 From 1947-1961, the Milwaukee Road Olympian Hiawatha ran passenger excursions between Chicago and the Pacific Northwest, operated by the Chicago, Milwaukee, and St. Paul and Pacific Railroad.

The Olympian Hiawatha took scheduled excursions through scenic Idaho, Montana’s Bitterroot Mountains, and Washington’s Cascade range. On June 29, 1947, the Milwaukee Road inaugurated its streamlined flagship on a 43-hour, 30-minute schedule. This was advertised as being a “speedliner.” The railroad contracted industrial designer Brooks Stevens to design the train consist, which included some unique and signature cars of the Milwaukee Road.

For the Olympian Hiawatha release, Kato will be making a new FP7A locomotive and a new tooled version of the F7B featuring a winterization hatch (a necessity for trips through the northern US and across the Rockies!)