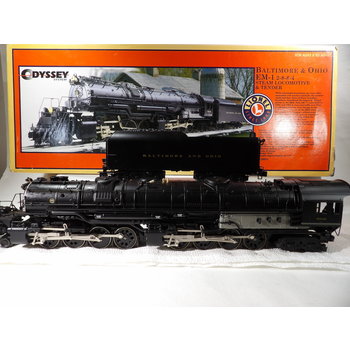 While articulated locomotives are most often associated with western railroads, the eastern roads had their share of these incredible leviathans. Considered the largest and finest power on the B&O, thirty EM-1's were built in 1944 and 1945 to haul coal traffic over their Cumberland Division. Even though tunnel and bridge clearances on the B&O were tight, the locomotive's designers utilized every possible square inch of space to maximize power while still operating within the clearances of B&O's main lines.

Lionel's new scale model captures all the detail of the original, along with the features you've come to expect: Die-cast construction, Command Control, Pittman motor and Articulated RailSounds.