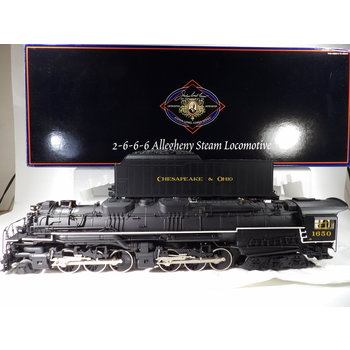 Joshua Lionel Cowen Series Chesapeake & Ohio 2-6-6-6 Allegheny   In the 1940s, the Chesapeake & Ohio Railway turned to the Lima Locomotive Works to produce a new powerhouse that would replace their aging H-7 class 2-8-8-2 coal haulers. Named in honor of the mountain range where they worked, this new locomotive took Lima's Superpower steam concept to a whole new level. Dubbed the Allegheny, it produced 7,500 horsepower at 40 m.p.h. and 110,200 lbs. of tractive force. The C&O designated the new steamers as class H-8, taking delivery of the first unit in 1941. The massive 2-6-6-6's could haul 10,000 ton trains from the coal fields of West Virginia to eastern ports. Despite their impressive performance, the switch to diesel power found the massive locomotives being retired as early as 1952. Although its career was brief, the sheer size and power of the Allegheny ensures its place among the roster of the greatest steam locomotives of all time.   This top-of-the-line O gauge locomotive accurately portrays C&O #1650, one of the last group built in 1948. Virtually every detail part and piece of piping is separately applied. Prototypical distinctions include cab window configurations, ladder arrangement and unique overfire jets.

Some of the latest Lionel innovations are found in this TMCC-equipped articulated steamer, including the unsurpassed RailSounds 5.0 sound system. Listen to the ultra-realistic four chuffs per driver revolution as the locomotive battles down the mainline. As speed increases the cadence of the chuff rate changes, just like the real thing.