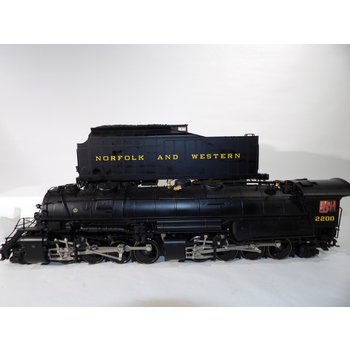 In 1952, locomotive #2200, a Y6b class 2-8-8-2, rolled out of the Norfolk & Western Railway's Roanoke Shops. It would be the last American mainline steam locomotive and would ride the rails of the nation's last Class I steam railroad. Producing 5,500 horsepower and 152,026 pounds of tractive effort, the Y6b was the zenith of the Mallet articulated steam locomotive type. Along with the J class 4-8-4 and the A class 2-6-6-4, the Y6b formed a motive power triumvirate in the last bastion of the steam locomotive. As late as 1958, the Y6b was still king of the mountain, sharing the rails with the N&W's first generation diesel locomotives.  Living up to the prototype, our model features peak performance and many new innovations. The refined Conventional Transformer Control Mode allows for lower starting speeds, improved smoke output and simplified Odyssey System controls when operating in a non-TMCC environment. Each driver is individually sprung for a full chassis suspension. Running gear is painstakingly reproduced down to the working lubricator linkage. The industry-standard RailSounds sound system includes two FatBoy speakers for added depth and clarity. The #2200 comes to life with an accurate array of prototypical sounds including a melodious whistle inspired by actual recordings of a Y6b in its prime. Just like the prototype, the synchronized chuffing of our model reproduces the unique shift from "simple" to "compound" as the locomotive gains speed. Another Lionel first, an all-new smoke system synchronizes smoke output, sound and motion. As the Y6b battles a tough grade, watch the valve gear pound, hear the labored chuff, see the smoke skyrocket forth. No other model offers a more accurate re-creation of N&W's greatest giant conquering Virginia's notorious Blue Ridge.  Building on the legendary details of the Joshua Lionel Cowen Series, such as realistic separately applied coal load, see-through boiler walkways and opening cab roof hatches, the new Y6b raises the bar even further. Virtually all piping and appliances such as the Worthington SA feedwater heater are separately applied. A separate cord runs from the cab to the whistle. The fully detailed interior includes painted valve handles and gauges with wood planking detail on the cab ceiling. The cab walls and ceiling are even painted a prototypical shade of industrial green. With the highest level of detail and unprecedented performance, this all-new locomotive is the definitive Y6b in O gauge.