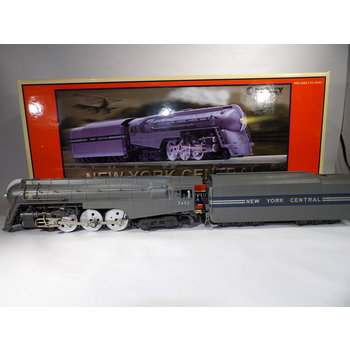 Pre-Owned Lionel (TMCC) O Gauge NYC Dreyfus Hudson 4-6-4 Loco C#209 # 6-28084 The Hand rail is broken on the Tender and the smoke unit is not working.. All other sounds and couplers work. Runs great..

The Hand rail is broken on the Tender and the smoke unit is not working.. All other sounds and couplers work.
Runs great.

Beginning in the roaring twenties, Henry Dreyfuss embarked on a quest to redefine the consumer and industrial world of his time. His work ranged from flyswatters and radios to farm tractors and cruise ships. In the late 1930's, at age 34, the industrial designer received possibly his greatest challenge from the New York Central Railroad—merge the sleek aerodynamic form of an airplane with the utilitarian hard edges of a steam locomotive. NYC wanted the vogue of the modern age, in a word "streamline." Refining concepts from the earlier Commodore Vanderbilt, Dreyfuss gave the world an art deco icon—the Dreyfuss J3a Hudson. Instead of obscuring the locomotive's shape with a shroud, he chose to enhance it with a cowling that conformed tightly to the lines of the locomotive and tender. Running gear and other vital parts remained exposed for aesthetic balance and easier maintenance. Christened in 1938, this sleek new Hudson led the famed Twentieth Century Limited which sped passengers between New York and Chicago in 16 hours, the fastest regular service of the time. ---Lionel has worked tirelessly to pay tribute to this inspiration of locomotive design. Our Dreyfuss J3a Hudson contains all of your favorite features such as TrainMaster Command Control and RailSounds. Examine the detail and smooth styling. We've truly captured the streamlined spirit of an era. Don't miss out on your opportunity to own this masterpiece of form and function.

This engine has barely been run, probably just to test. We have tested it and all features work but the smoke unit. and it runs and operates properly. There is damage on the tender handrail, box, Styrofoam packing insert, packing materials.