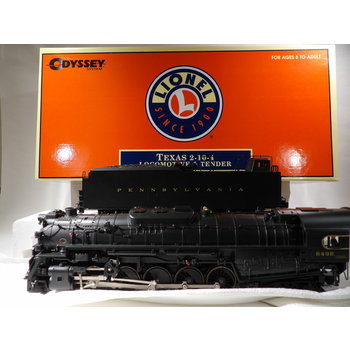 In 1942, the Pennsylvania Railroad, under increasing wartime pressure, desperately required new locomotive power to meet our nation’s urgent needs. With government restrictions not allowing for the design of new locomotives, the Pennsylvania Railroad went searching for an existing locomotive to meet two critical requirements. First, this new locomotive had to be a mountain climber and second, it had to be fast running everywhere else. PRR borrowed a C&O 2-10-4, put it to the test, and by December, the PRR’s Altoona Shops had begun production of 125 of these landmark locomotives.

The 2-10-4 that the PRR borrowed from C&O (also known as the Class T) owes its design to the pooled effort of the C&O, NKP, Erie and Pere Marquette railroads. These officials joined their efforts to form a group named the Advisory Mechanical Committee. This group’s assignment was to design locomotives that best met the needs of these four railroads. The C&O’s requirement was a locomotive capable of handling high tonnage for its newly completed line beginning at the Ohio River and running straight through to Toledo, eliminating the need for an engine change. Soon the C&O T1’s were moving 160 car, 13,500 ton consists virtually single-handedly to Toledo!

Bring the majesty of this powerful locomotive to your empire. Built with an eye for realism, this locomotive continues the grand tradition of exciting, scale steam offerings by Lionel. Equipped with the Odyssey System for speed control, and the venerable TrainMaster Command Control system, the 2-10-4 combines power and grace. Offered in both the Pennsylvania and C&O versions, complete with different tenders, these models are sure to be a great hit on your layout.