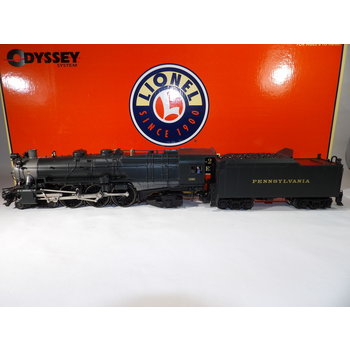 Add to wishlist Add to compare
Pre-Owned Lionel (TMCC) O Gauge PRR K4s 4-6-2 Locomotive C#209 # 6-38025
As the words "New York Central" will conjure images of majestic Hudsons, "Pennsylvania Railroad" immediately manifests visions of gallant K4 Pacifics. The premier passenger locomotives of the Pennsylvania Railroad, K4 steamers kept pace with the larger locomotives of the competition for almost four decades. This fleet of 425 locomotives led the finest passenger consists of the day, such as the Broadway Limited and the Nellie Bly. The all-new Lionel Pennsylvania K4 Locomotive is unlike any other produced in O Gauge. This scale-sized locomotive features precise detail and performance—from accurate builder's plates and tender markings to a Wireless Tether connection and the Odyssey System for speed control. For our prototypes we chose road numbers #1361 and #5385 and modeled the locomotives as they appeared during their peak years, through the 1930s into the 1940s. During that time, the locomotives maintained the classic, clean aesthetics of the early K4 Pacifics—slotted pilot, pilot deck mounted train control box, turbo-generator mounted atop the smokebox—while gaining some "modern" performance-enhancing components—power reverse, Standard HT stoker, and a tender designed by Pennsy's mechanical engineer extraordinaire, W. F. Kiesel, Jr.

This engine has barely been run, probably just to test. We have tested it and all features work and it runs and operates properly. There is no damage or defects. box, Styrofoam packing insert, packing materials.