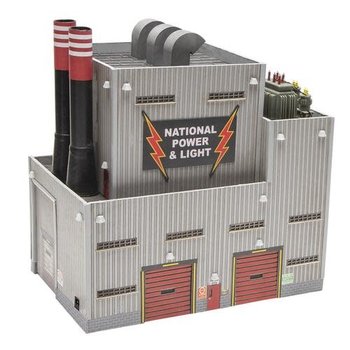 The basics: This is a fully assembled and decorated power utility plant. The building has a 8 by 5-1/8 inch footprint and is 8-1/8 inches tall. There is an animated National Power & Light sign. Additionally, there are 24 windows and over 20 exterior security lights. The power transformer has red blinking lights. There are power jacks on the side of the building for an over-the-table connection as well as a pigtail plug underneath for feeding the Plug & Play connection up through the table. The building has four large service doors (two on the removable tunnel inserts) and two employee doors.

Why you need this: Every train city needs a source of power, and your railroad needs product to haul. Satisfy both requirements with the National Power & Light building. This eye-catching structure has several levels and plenty of angles to become a focal point of your railroad. The building has four structural levels: The main building, a second level with two smokestacks, a platform housing three power transformers, and a rooftop with three air intakes.

The power plant has the appearance of a modern design with a metal exterior. The building is painted a pleasing gray and the doors are red. The smokestacks are black capped with red and white stripes for high visibility. The flat surfaces are black. The transformers are flat green with yellow and red insulators. The largest transformer has red flashing LEDs.

The most striking element is the animated National Power & Light sign! The lightning bolts are steady red, and then start a three part chase sequence with the top third of the bolt illuminating, then the second third, and finally the last third of the bolt. The bolts then revert to red.

You can leave the tunnel inserts in place or remove them for mainline use. In case your plant isn’t powered by natural gas, this a good spot to park some coal cars ready for unloading.