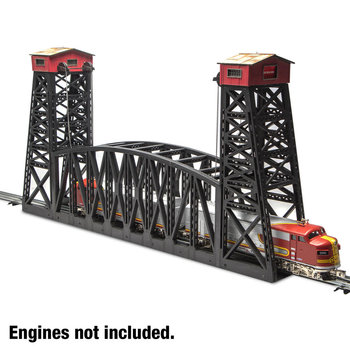 Rivers and railroads have long had a prickly relationship. When the rivers were wide enough and deep enough, they were competitors for freight. Where the railway and river needed to cross, the cost of a bridge needed to be factored into the profit and loss statement!

A wide variety of bridge styles to defeat deep gullies, but where rivers and railroads operated near water level, they needed a variety of styles to meet the task. The bridge needed to either be taller than the tallest vessel on the water, or it needed some other way of getting out of the way!

Some bridges elevate like a drawbridge. Others rotate, pivoting the trestle to make a clear path for the boat. In a few cases neither of these were practical. The aerial bridge was designed literally lift the railway line upward where it would remain suspended until ship traffic moved on. Now Menards offers you a chance to place one of the most creative railroad bridge designs on your O gauge railroad.

The basics: This bridge model is a fully assembled and decorated structure. It has ample room for O gauge locomotives and rolling stock: The base is approximately 30-inches long, with an interior train clearance height of 6 inches and a width of 4 inches. This works well with tubular track as well as track systems using a plastic base.

Each end of the bridge has a 16-¼ inch tower with a motor housing structure up top. This simulates the location of the drive equipment that turns the sheaves that move the counterbalances to raise or lower the bridge. The bridge itself does not move. Chains run from the sheaves and attach to the bridge.

The equipment sheds have windows and interior illumination. The rooftops feature flashing red lights. You will also notice backlit sign holders on the motor housing buildings, allowing you to customize your bridge with any of the 48 decals included (two of each road name), or create your own!

Why you need this: This structure represents a marvel of modern engineering. The wooden construction reproduces the structural steel components used for a heavy-duty bridge. Painted black, it temps you to customize it with rust-colored hues.