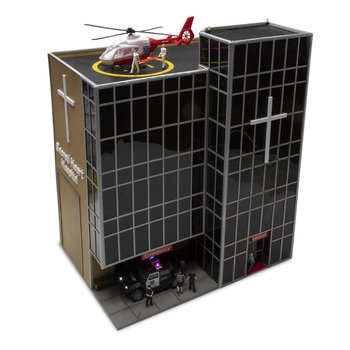 Calling Dr. Kildare: The no. 279-8283 Sacred Heart Hospital by Menards


Every city should have a top-notch medical facility. Health care is an often-overlooked element of most train layouts - until now! Menards has created the Sacred Heart Hospital to serve your O scale community!


The basics: This is a fully assembled and decorated building! It is an action-packed hospital with a 13" x 10 1/8" footprint and a height of 16 3/8". It rises above many O gauge structures and well it should: There is a heliport for emergency service helicopters!


The model features exterior lighting, flashing rooftop lights, a police car with alternating red and blue lights, and when triggered, a siren sound and rotating helicopter blades. There are six figures on the building, plus Jack the German shepherd. The activation button has two feet of wire for easy placement on your layout.


Why you need this: O gauge hospitals are few and far between and Menards solves that shortfall with a striking, modern structure. The design encompasses a popular tinted window exterior.


The front entry is illuminated and a large cross is mounted above it. The emergency room receiving area recessed into the first floor.


The main tower rises to just over 16 inches, while the rear of the hospital, home to the helicopter-landing platform, is 14" tall. It is a tan brick design that is a good contract with the ultra-modern front. It also has a removable run through section for easy placement over an active track section.


When powered up, you can see that something big is going on! White warning lights mounted on the roof access structure begin to flash! Safety lights surrounding the chopper’s landing spot begin to alternate. Press a button and blades begin to turn and sirens roar.


There are two attendants carrying an empty stretcher toward the helicopter, and Jack, the German shepherd rests by the rooftop elevator!


Down at the emergency room, the police car’s rooftop light flash red and blue. Two police officers escort a "perp" wearing a black and white striped shirt, into the building for a little medical attention. Just another day at a big city hospital!


Sacred Heart Hospital commemorates a building found in most mid-sized cities, but that has been too long ignored in O gauge. This isn’t just a pretty building, but with light and sound action, it will become a point of attention on your railroad!