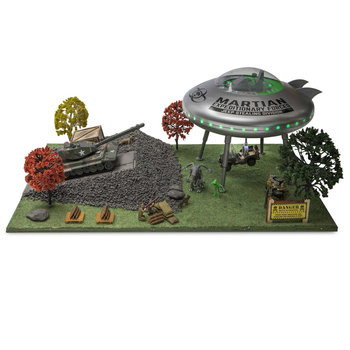 Defend your planet! O Gauge War of the Worlds

First those rascally Martians came for our cows. Next they raided our supply of tasty M&Ms treats. Now, though, they’ve gone too far! They are prowling around the Army base, snatching our Jeep’s! Heed the bugle call and protect our vehicles from these interplanetary hoodlums!

The basics: The Army vs. UFO scene is a fully assembled and decorated 18 x 11-1/4 x 7-1/2 diorama with an illuminated flying saucer equipped with a clamp for raising and lowering a Jeep; soldiers, aliens, military equipment, and a moving tank with flashing cannon, machine guns, and sound effects.

Sound effects are triggered with a push button on a two-foot lead. The accessory has a topside power plug-in on the gravel hill, and a second in the base for a connection from beneath the tabletop.

Why you need this: This is a whimsical operating accessory suggesting the Martians may have landed at the wrong place and the wrong time: A U.S. Army base. Clearly the Army was on maneuvers when the Martian Expeditionary Force decided to grab the General’s trusty Jeep!

The saucer itself is a classic oval with a large, clear canopy. The pilot has superb visibility from the flight deck. The pilot rests in a command chair while control panel lights glimmer. An eerie green light envelopes the deck, hinting at the craft’s sinister intent. Pulsating green and white lights flash brightly around the saucer’s middle.

Having sighted a likely vehicle to snag for the Martian high command, the vehicle is hoisted upward. However, the local G.I.s have something to say about interplanetary Jeep-jacking!

With one Jeep already damaged, five troopers try to contain the situation. The weird lights of the spaceship don’t intimidate the soldiers! Fuel drums are positioned, a supply crate is on hand with extra gear. There are even 18 cannon shells stacked up and ready for use! Zero hour finally arrives! Earth stands up to the Martian menace at last!

Up the hill comes something big: a great equalizer - a tank! With a press of a button you hear the cry "Fire!’ Tank firing is triggered through a button with a two-foot wire lead. The cannon barrel flashes, and green machine gun lights flicker! The tank then backs down to avoid return fire. Slowly it moves up once more to challenge alien vehicle thieves!

The terrain includes soldiers dug into defensive positions, and ever safety conscious, they posted warning signs alerting the unwary that they were entering a battle zone! Fear not, Jack the German shepherd is on the scene, looking into what all the commotion is about!

This accessory is a great companion to our full line of military-themed rolling stock.