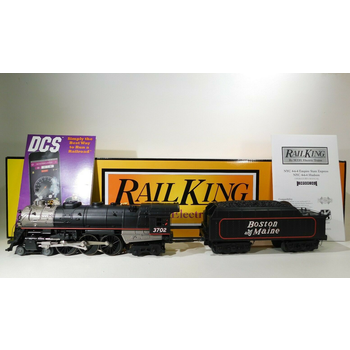 In Thoroughbreds, Alvin Staufer and Edward May's definitive book on the New York Central Hudsons, Al summarizes the attraction of this engine in a few perhaps-biased but nonetheless eloquent words: "The Hudsons had it all: looks, performance, and timing. . The forte of all Hudsons was power at speed.. That the NYC Hudson was the first of her wheel arrangement in the United States matters not nearly as much as what she hauled and how she hauled it. The Hudsons were designed to haul the Great Steel Fleet on the Water Level Route [the NYC's raceway from New York to Chicago, home of the 20th Century Limited and the Empire State Express, and the bane of rival Pennsylvania Railroad, whose route lay over the Allegheny Mountains]. The Hudsons were a New York Central phenomenon. They were a special machine for that special road. They were synonymous with the best. They were the best."

Built mainly in Alco's Schenectady shops in the late 1920s and 1930s, the NYC Hudsons were part of the "super-power" era of steam technology that began with Lima's A1 Berkshire in 1924. Super power engines were the external combustion engine refined to its finest form, with technological advances such as bigger fireboxes supported by 4-wheel trailing trucks; higher pressure, more efficient boilers; superheaters to increase the heat of the steam so it could do more work; and larger drivers for speed and power (79" on the Hudsons).

Our model of this famous engine exemplifies the best in today's O gauge locomotives. Relive the drama of the Hudsons as they performed on the New York Central and many other American railroads, with synchronized puffing smoke, a full range of authentic steam sounds, and realistic passenger station announcements. A powerful flywheel-equipped motor and twin traction tires ensure the RailKing Hudson duplicates the magnificent performance of the originals.