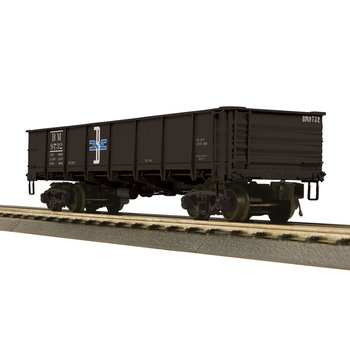 While gondolas come in many lengths and types, their common denominator is extreme versatility. Almost any weatherproof cargo can and has been carried in gondolas, from coal to sugar beets to machinery to logs to telephone poles. A particularly versatile variation was the AAR (American Association of Railroads) Class GS, with drop bottom doors hinged along the center sill, enabling loose cargos to be unloaded by gravity to either side of the car. From the 1920s through the 1950s, class GS gons were built in large quantities, especially for western railroads that did not own large coal hopper fleets.

Our models, both the all-steel and composite wood and steel versions, are based on GS gondolas built for the Southern Pacific and Union Pacific railroads in the mid to late 1940s. While the UP’s composite cars were built during the war to conserve steel, the SP ordered composite cars after the war to save weight when transporting lighter loads such as wood chips and sugar beets. Although composite cars were often rebuilt with steel sides, the Southern Pacific is known to have operated composite gondolas in beet service as late as the 1980s. Our superbly detailed models feature added-on ladders, corner steps and grab irons, as well as intricate, non-operating drop-bottom doors and door mechanisms.

MTH Premier O Scale freight cars are the perfect complement to any manufacturer’s scale proportioned O Gauge locomotives. Whether you prefer to purchase cars separately or assemble a unit train, MTH Premier Rolling Stock has the cars for you in a variety of car types and paint schemes.

Virtually every sturdy car is offered in two car numbers which makes it even easier than ever to combine them into a mult-car consist. Many of MTH’s Premier Rolling Stock offerings can also operate on the tightest O Gauge curves giving them even more added versatitlity to your layout.

The name for gondola cars actually predates railroads. In the early 1800s, utilitarian flat-bottomed boats with low sides, used to transport coal down the Potomac River to the Washington D.C. area, were called gondolas as a spoof on the much fancier Venetian gondolas. Similarly shaped coal-carrying cars on early railroads earned the same moniker. As more specialized cars were invented for coal service, the gondola evolved into the general-purpose car it is today.