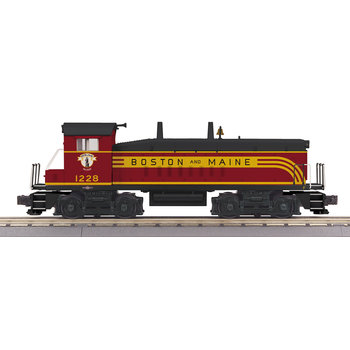 EMD's 800-hp SW-8s and 1,200-hp SW-9s both debuted in 1950, marking the next stage in the evolution of one of railroading's longest-lived diesel families. The first SW-class engine, the 600-hp SW1, appeared in 1939, and the SW units remained in the EMD catalog until the 1,000-hp SW-1000 was finally retired in 1986. With the "SW" in the name denoting that the engine was built for switching duties, it never needed the high horsepower ratings of road diesels. They could be paired with cab-less "calf" units in the classic cow and calf configuration if a particular job needed more power.

These boxy little workhorses return to the M.T.H. RailKing lineup in a new variety of roadnames. As with all RailKing diesel engines, each is available with the exciting Proto-Sound 3.0 system for unprecented value and fun. As switch locomotives, the SWs are perfect for yard duty thanks to their incredible slow-speed performance - performance governed by M.T.H.'s industry-leading Proto-Speed speed control system. No other switchers can creep so slow or uncouple cars from front or rear without additional equipment. If you've got a transformer with a whistle and bell button, you've got the best switcher you can buy today.

While the SW-8s and -9s were produced as replacements for the aging NW-2 diesel switcher, they proved themselves impervious to age themselves, becoming railyard mainstays for decades.