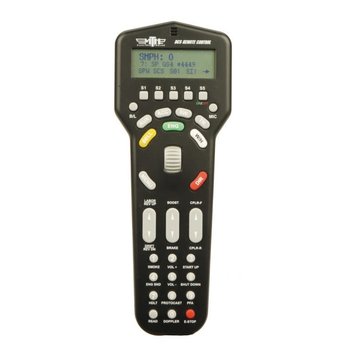 DCS is a system for controlling your entire layout — multiple sound-equipped engines, switches, and accessories — from one or more wireless handheld controllers. DCS is compatible with all M.T.H. Proto-Sound 2.0- or 3.0- equipped locomotives. In O gauge, it is also compatible with locomotives equipped with Lionel® TMCC® and Legacy™, as well as conventional AC-powered engines.

The 4-line LCD grayscale monitor is easy to navigate. Simple to understand acronyms allow the user to access multiple features and locomotive settings that are not accessible when Proto-Sound locomotives are operated in conventional mode.

In conventional operation, an AC or DC transformer varies track voltage to adjust engine speed and direction. Command systems such as DCS, however, put a constant voltage on the track (around 18 volts for DCS) and vary speed by telling each engine how much of that voltage to use. Command control allows different engines to do different things — like run at different speeds, go in different directions, or make different sounds — even when they are on the same track.

In the DCS system, commands such as speed, direction, and sound control are sent as radio signals from the handheld throttle to a TIU (track interface unit). The TIU translates those radio signals into digital information that is sent through the rails and picked up by a receiver in the appropriate engine — telling it to go, for example, 37 miles per hour, blow the whistle, smoke more heavily, or any other command. DCS locomotives can also send information back to the handheld to let the operator know what they’re doing.