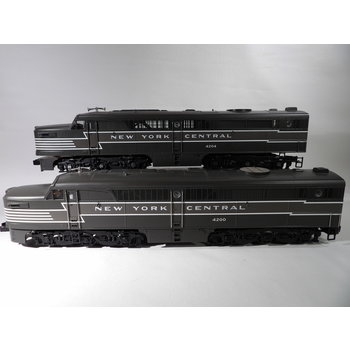 The Loco Runs well in DCC and conventional. The loco has been upgraded to MTH 2.0 proto sounds. All the features work well. The dummy unit does not fire the rear coupler.

After seeing the success of EMD's E-8s, ALCO poured their post-war energies into developing a new passenger diesel. The result was the 2000 horsepower PA, introduced in 1946 and powered by a single Alco 16-cylinder 244 engine. Like EMD's trend-setting diesels, the PA was designed to be used in combination, as many units were needed to pull a given train. The ABA configuration was popular and elegant because of the way it enhanced the engine's long, sleek appearance. It was GE's industrial designer Ray Stevenson who won a contest to design the striking engine. With its long, clean lines, Stevenson's entry made the perfect canvas for the beautiful streamlined style and colorful paint schemes popular in the mid-twentieth century. M.T.H. is proud to offer the stylish ALCO PA ABA configuration in the markings of four railroads that knew how to take advantage of the PA's great looks: Santa Fe, Southern Pacific, New York Central and Pennsyvlania.