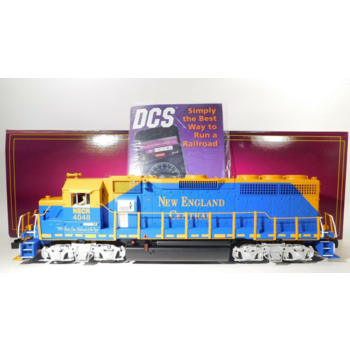 Both under the hood and under the frame, the GP40 exemplified EMD's product line in transition. Along with its less-powerful sister, the GP38, the Geep 40 was the first EMD locomotive with the model 645 diesel motor. Its predecessor, the 567 diesel that had powered EMD locos since the late 1930s - named for its 567 cubic inch displacement per cylinder - had become inadequate to meet customers' demands for higher horsepower.

Remarkably, the 645 was the same external size and weight as the motor it replaced, with the power increase achieved largely by increasing the cylinder bore. In its normally aspirated form, with a Roots blower pressurizing the incoming air, a 16-cylinder 645 cranked out 2000 horsepower; this was the motor in the GP38. The same engine with a turbocharger, however, put out 3000 hp in the GP40, with lower fuel consumption and emissions and improved high-altitude performance; the tradeoff was higher maintenance costs for turbo-equipped engines.

A design problem with turbochargers is "turbo lag": because the turbo's air compressor is powered by engine exhaust gas, the turbo doesn't become effective until the engine gets up to speed. In Alco diesels, this issue produced thick black smoke as the motors ramped up, earning them the nickname "honorary steam engines." In the 645 motor, EMD's engineers solved the problem with a gear train and over-running clutch, which drove the turbo at low engine speeds until the exhaust gas took over.

While the GP40 heralded the introduction of a new motor, it also marked the beginning of a long goodbye to the four-axle road diesel. Under the frame, railroads were seeing that six-wheel trucks, once an expedient for spreading out engine weight on lighter-duty track, were more suited to the increasing tonnage and speed of modern freight service. The GP40 and its successor, the GP40-2, were the last high-horsepower, four-axle Geeps to sell in large quantities. During a six-year production run that began in 1965, over 1200 GP40s were sold to U.S., Canadian and Mexican railroads. Notably absent from the list of original owners, however, were western heavy haulers Santa Fe and Union Pacific; both roads purchased fleets of six-axle EMD SD40s and SD40-2s. Although the lighter-duty, four-axle GP38 series continued to be a strong seller, the transition to the six axle, high-horsepower unit - which would become the standard road diesel of the 21st century - began in the era of the GP40.