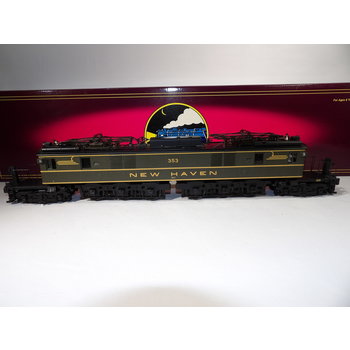 Although the Pennsylvania took pride in calling itself "The Standard Railroad of the World," its most famous locomotive had its roots in a General Electric-designed product borrowed from its much smaller neighbor to the north. The New York, New Haven & Hartford's ten rather plain-looking EP-3 electrics were the fathers of the Pennsy's legendary fleet of 139 GG1s. Built in 1931, the EP-3 was General Electric's effort to steal the New Haven's business away from rival Westinghouse Electric - and it worked. The EP-3 could easily hurry 15 heavyweight Pullmans down the road at 70mph, and its success led the New Haven to purchase almost all future electric locomotives from GE. Bigger than any previous New Haven juice jacks, the EP-3 was, in electric locomotive parlance, a 2-C+C-2: a two-axle, unpowered guide truck at each end and a pair of three-axle powered trucks in the middle. Each driven axle was powered by two electric motors. The last box cab electrics built for the New Haven, the EP-3s were nicknamed "flat bottoms" by their crews. While the EP-3's were thriving on the New Haven in the early 1930s, things were not going as well with the Pennsy's new electrification project.