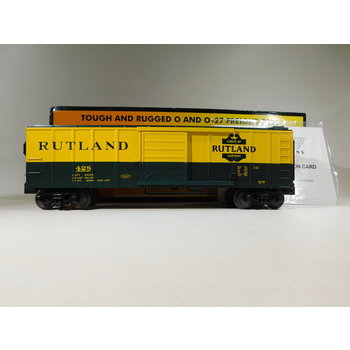 The 40' steel box car so familiar to model railroaders was a product of the 1930s. Wood box cars, which were built into the World War I era, and early steel cars were largely non-standardized, with details varying from railroad to railroad. The move toward standardization began with American Railway Association (ARA) designs of 1923 and 1932. It culminated in the 1937 AAR boxcar, which was adopted by railroads from coast to coast and built in the tens of thousands. (The AAR (American Association of Railroads) was and still is the successor to the ARA.)

While the original paint schemes were usually drab variations on standard box car red, new schemes in the 1950s and later brought color back to the American freight train. Our models replicate many of the most fondly remembered paint schemes seen on these cars.

High quality, traditionally sized RailKing Freight Cars provide detailed bodies and colorful paint schemes for the O Gauge railroader. MTH makes an enormous variety of RailKing Freight Cars, including many different car types and roadnames. No matter what era or part of the country you are modeling, RailKing is sure to have something for you.