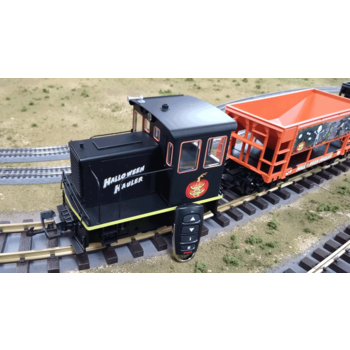 The GE 25-Ton diesel locomotives are small, two-axle industrial diesel switching locomotives. They were procured by many railroads and shortlines in North America, starting before the Second World War, as American railroads began converting from steam to diesel power. General Electric started in 1938 with the construction of small diesel-electric locomotives.

From this point on, these compact locomotives were used on both standard and narrow-gauge lines for local switching service and operation in industrial plants. All GE-built 25-Ton locomotives had a Cummins 150 hp diesel engine turning a generator, which powered a traction motor on a single axle. The other axle was connected via chain-drive.

The locos were known for their excellent pulling power compared to their size and were popular with operating crews. The locomotives had a maximum speed of about 20 mph. Production lasted for decades with relatively little change, finally ending in 1974.

They were the best-selling small diesel locomotives in America, and many were exported to other markets. Over time, GE made various production modifications, and numerous further changes were made by railroad shops crews.Many are still in use today.