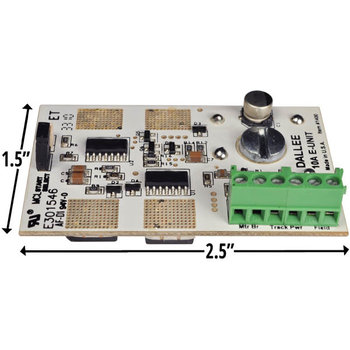 Dallee Universal E -unit # 1400
Not yet rated Add your review

Electronic Reverse Units, commonly referred to as E-Units allow trains operating on AC power to sequence between forward, neutral, and reverse. The unit sequences to the next mode of operation when power is removed and restored to the train quickly (less than 6 seconds). Dallee E-Units sequence in this order: forward, neutral, reverse, neutral, forward.

Determining which E-Unit is best to use: If you have a transformer with meters or a separate AC ammeter you can check the ampere draw of the engine. To do that, power the engine up with it sitting on the track. Place it in the forward direction and raise the power to the engine while holding it's coupler to prevent it from moving forward. While doing so, monitor the amount of ampere's it draws with the wheels slipping and just before slipping or with the engines motor stalled out. That will tell you the maximum current draw of the engine which would indicate which E-Unit is needed to handle that amount of current. This E-Unit will handle all model train engines!