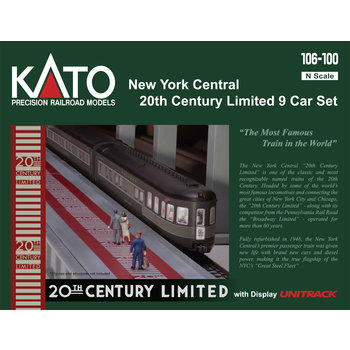 The “20th Century Limited” one of the iconic New York-Chicago trains of yesteryear, makes its debut as Kato's newest Named Train!

This classic named train set replicates the New York Central's premier high-speed luxury train as it appeared in the late 1940's/early 1950's, when it had all-new cars and a sleek complement of streamlined diesel engines to pull it.

This 9-car set includes a full set of uniquely tooled cars that match the post-1948 appearance of this train, including the iconic "big window" observation car. It is designed to be pulled by Kato's new release E7 locomotives in matching paint.

Contents of this set: